Mumps is a contagious viral infection that is spread by droplets of saliva or mucus, coming from the mouth, nose, or throat of an infected person.

Most common symptoms develop 16-18 days after exposure to the virus (range 14-25 days). Treatment for mumps consists of getting plenty of rest and consuming fluids. Antibiotics are not useful.

To protect your health we urge you to do the following: 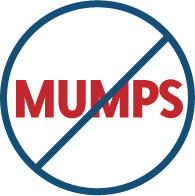 collapse all expand all

Mumps is a viral infection that is spread by droplets of saliva or mucus from the mouth, nose or throat of an infected person and can spread easily in settings where people have close contact with each other, such as college dormitories. Symptoms typically develop 2-3 weeks after exposure to the virus. See the CDC website for more information.

What are the symptoms of mumps?

The most common symptoms are fever, headache, and swollen or tender salivary glands under the ears, jaw or tongue.  In males, the disease can also cause painful, swollen testicles.  The disease can also lead to hearing loss, aseptic meningitis (infection of the covering of the brain and spinal cord).

How can I prevent mumps?

Most people born before 1957 have had mumps disease and are immune to mumps and most people who have had two doses of MMR vaccine will also be protected against mumps.  However, 5-10% may still be susceptible to mumps after receiving the two recommended doses. There is evidence that in outbreak settings an additional dose of MMR may decrease transmission of mumps.

MMR vaccine is not appropriate for pregnant women or for individuals with weakened immune systems.

What should I do if I have symptoms?

Is mumps a serious disease?

(CDC) Most people with mumps fully recover after a few weeks. While infected with mumps, many people feel tired and achy, have a fever, and may have swelling of the salivary glands on the side of the face. Others may feel extremely ill and be unable to eat because of pain around the jaw, and a few will develop serious complications. Men and adolescent boys can develop pain or swelling in their testicles, and in some cases this can result in impaired fertility. In very rare cases, sterility can result.  Another rare complication involves inflammation of the protective membranes (meninges) covering the brain and spinal cord.  This can cause severe headache, meningitis, and in some cases partial or temporary loss of hearing.  In rare cases, this hearing loss can be permanent. One of the more serious but rare complications of mumps is inflammation of the brain (encephalitis), which can lead to death or permanent disability.  Other organ systems can also be affected.

Most people born before 1957 have had mumps disease and are immune to mumps and most people who have had two doses of MMR vaccine will also be protected against mumps. However, 5-10% may still be susceptible to mumps after receiving the two recommended doses.

I've been told that I need to stay away from people while I'm sick with mumps; what does that mean and why does it matter?

(CDC) When you have mumps, you should avoid close and prolonged contact with other people until at least 5 days after your glands began to swell, because you are most contagious to others during this time period. This means you should stay home when you are sick with mumps. You should not go to work or school. Even at home, you should limit contact with the people you live with.  For example, sleep in a separate room by yourself if you can. Wear a mask when others are in your vicinity.  Staying home while sick with mumps is an important way to avoid spreading the virus to other people.

Why do mumps outbreaks happen?

(CDC) Although the vaccine against mumps is very effective, it is not perfect. When the mumps virus is introduced into settings where close contact between people makes it easy for the virus to spread (such as schools and colleges) outbreaks sometimes occur. People who are not vaccinated against mumps have a higher chance of getting the disease and spreading the virus to others.

Before there was a vaccine against mumps, mumps was a common childhood disease in the United States, and in some cases, the disease caused complications, such as permanent deafness in children and, occasionally, swelling of the brain (encephalitis), which can result in death, although very rarely. Now, there are normally only a few hundred cases of mumps every year. However, outbreaks occur sometimes and involve a higher number of cases. In 2006, there was an outbreak affecting more than 6,000 people in the United States, with many cases occurring on college campuses. In 2009, an outbreak started in a close-knit religious communities and schools in the Northeast, resulting in more than 2,500 cases. These outbreaks have shown that when people who are sick with mumps have close contact with a lot of other people (such as among students living in dormitories and students and families in close-knit communities) mumps can spread even among vaccinated people.