I asked this guy I like on a date for coffee, but I'm not sure if registered it's a date 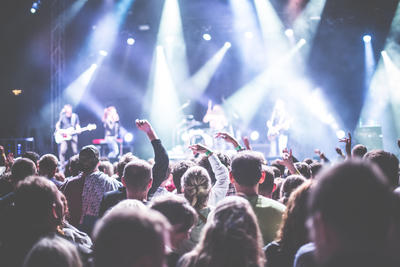 There's this guy I really like, so I asked him to go to a concert with me. He said he would really like to, but was unable to go. He said though that we could "meet up" another time if I wanted, and asked me to grab coffee and chat with him next week. I just am not sure if he knows that when I asked him to the concert, I was asking him on a date. I only ask because I feel like "grabbing coffee" could be just hanging out as friends, or possibly more. Am I overthinking it?

I think the idea of grabbing coffee could totally be interpreted as a date too! It all depends on their preferences and ideals when it comes to romantic situations. Some people prefer to stick to the archetype of dinner and a movie or another typical date, but some people, myself included, like to do casual things to take the pressure off. I think it’s best to try to not overthink the situation, allow yourself to go with the flow, and try to enjoy the time you spend together either way. Especially in college, we’re all kind of busy, so we have to try to make the most of the time we have to date, whatever that may look like.

Also, I feel that the fact that he took the opportunity to hang out despite not being able to go to the concert with you is a great sign, it shows that he wants to make sure that you know that he has an interest in spending time with you, whether that be in a platonic or amorous context. I feel that right now, the best move you can make is to get some face-to-face time and use that to help inform you about his intentions. I think that it’s a little too early to have one of those “what are your intentions” conversations, but that could definitely be a possibility if his intentions are still unclear after several hang-outs.
Justin

Hi there!
First off, good for you for taking the initiative to ask him out like that! I agree with you, he might not have understood your concert offer as a possible date, but the fact that he wants to meet up and do something with you is a good sign! If you're really interested in him, then accept his invitation for coffee and once you meet up, give him signs that you would like for the friendship to become something more. Tell him you're interested in doing dinner and a movie (which is a pretty clear date) or if you want to be even more straightforward, tell him that you like him! Either way, you'll be glad that you made you intentions clear and that you can stop worrying about whether or not he understands what you want.
Good Luck!
Simran

Hello! Ah, the ambiguity of simple questions. From what I can tell, he seems to be interested in hanging out with you. Questions can be tricky, sometimes. Keep in mind that you asking him to go to a concert could very well be translated as a friendly gesture, too. Based on personal experiences, when a someone asks you out for coffee, it could mean that he/she/they/etc are interested. I think the best way to go about this situation is to directly ask him on a date (if you're still interested, that is) the next time you grab coffee with him. Then, you might have a clearer understanding of where your friendship or relationship lies. One thing that I immediately thought upon reading your question was, "Well, he did not go to the concert, but he sure did suggest another time to meet up." Go for the coffee chat and see if he is interested. Instead of pondering too much on this, just be bold and ask if he would like to go on a date. There is nothing to lose ;)
Angela